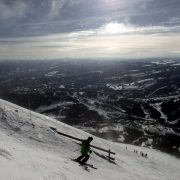 I have heard from more members than ever this season who opted to purchase season passes.  Ski areas continue to make season passes more attractive.  The most noticeable trend has been the “arms race” to offer passes with benefits at multiple resorts, including overseas resorts.  I’ll be very interested to hear from members how many places they were able to use the passes at this winter.

Below are some examples just to show how extensive some of the benefits can be.  (These can be complicated products and may have restrictions or benefits beyond what is listed here. While not intentional, this list may contain incorrect or out of date information.)

Some passes offer unlimited ski days at multiple resorts.  Maybe the best known of these passes, is Vail’s Epic Pass which many members have.  It basically offers unlimited skiing at all of their ski Resorts and some benefits overseas.

(Vail does offer other options, including a senior pass good at their Tahoe resorts with some restrictions.)

There has been a lot of interest generated in the new IKON Pass.  Modeled after Vail’s Epic Pass, it offers access at 12 Alterra Company destinations and 15 partner resorts. The destinations include big names like Mammoth Mountain, Squaw Valley, and Steamboat. Unfortunately, this pass replaces many passes offered last season, including discounted senior passes. My understanding is 80+ will still ski free at Mammoth this winter, but will have to go to ticket window every day instead receiving a pass.

The Mountain Collective has been around for several years now and currently includes around 14 destinations in the US and Canada (plus some overseas benefits). The pass provides 2 free days at each destination and then you can buy additional days at 50% off.

Powder Alliance:  Purchase a season pass to any participating Powder Alliance resort and visit the rest for FREE up to three times.

Freedom Pass:  Pass holders at participating mountains are now able to get three complimentary lift tickets at each partner mountain this season.